John Knox, the Hall of Heroes and the Yellowlees

Marble bust of John Knox in The Hall of Heroes. The National Wallace Monument, Stirling © A.B.

Within The National Wallace Monument near Stirling in Scotland, I really didn’t expect him to be present. But there he was, amidst the white marble portraits of Sir Walter Scott, of young Robert Burns, of Livingstone and many other famous Scotsmen : John Knox, the 16th century reformer, pamphletist and gifted orator. A protestant minister of Renaissance times amongst scottish stars and celebrities in science, industry, education and the arts. I guess his contribution to education granted him the honour to appear in the Hall of Heroes, which forms the second level of the Monument erected around 1860 and following.  It is doubtful that Knox’s marble bust is much noticed, as most visitors – me included – don’t look for 16th century intellectuals but sword wielding national hero William Wallace : the hugh monument is dedicated to him. The Hall of Heroes and the two other interior galleries within the tower are currently undergoing a major redevelopment. William Wallace, the 13th century freedom fighter, mostly remembered as Mel Gibson’s character in the movie « Braveheart » and not as the authenic historic figure, will soon share the second level with the Scottish heroes. The centrepiece will be the Wallace sword. I’m afraid that in the future, if all marble busts stay in the gallery, even less attention will be given to the protestant minister. Nevertheless, with his long curly beard and stern look, John Knox has something heroical. When I visited in june 2011, I didn’t check the artists name on his bust, in fact I can’t even remember if there was one. On the brass plate next to his portrait was written :

The birthdate is erroneous. Until 1905, when Scotland celebrated Knox’s 500th birthday, it was believed he was born in 1505, a result of a wrong reading and/or interpretation of a 16th century document. John Knox was actually born in 1513 or 1514, two dates still competing today : in those times, the New Year was celebrated at Easter (around march).

However, I researched and found David Yellowlees, born 1799 in Linlithgow, a leather trade merchant in Stirling, who died on november 6, 1886. This fits well with the brass plate. His three sons were David Yellowlees, born 1837, a psychologist in Glasgow, Robert Yellowlees, born 1841, a leather merchant and provost of Stirling, and John Yellowlees, born 1847, a minister who died a reverend and married to Cecilia McKinlay, in 1920. It has probably been the latter who instigated John Knox’s marble bust. I don’t know if he only paid for it, together with his brothers, or if he had it made for the Hall of Heroes in the Monument tower. Maybe the 2014 Wallace Monument refurbishment will tell us more about the marble sculptures inside the Hall. I am looking forward to visiting again and find out if old John Knox will still be amongst the Scottish heroes.

William Wallace fought with a sword, and John Knox with words. These were as dangerous to his ennemies as was William Wallace’s sword to the English army at Stirling bridge – both equally important to Scottish independance. 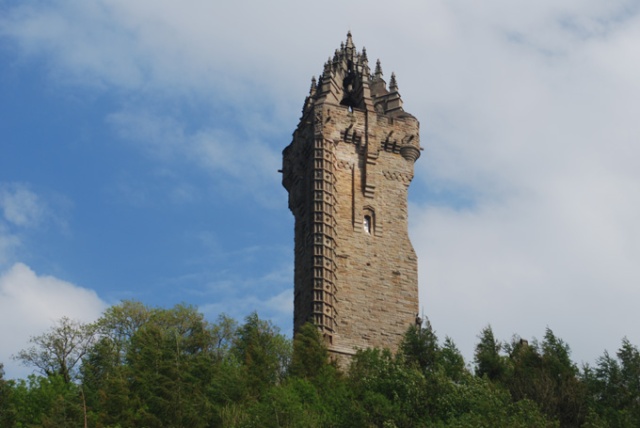