Stirling castle in Scotland has just received an all new and bright coloured tapestry, the sixth out of a series of medieval inspired hangings already decorating its Renaissance palace. These modern replicas are woven by West Dean Tapestry in a studio at Stirling castle and in the south of England and depict the « The Hunt of the Unicorn ». The original tapestries made of wool, silk, gilt wefts and silver in the south of the Netherlands ca. 1595-1505, are held in the collections of The Metropolitan Museum of Art in New York. 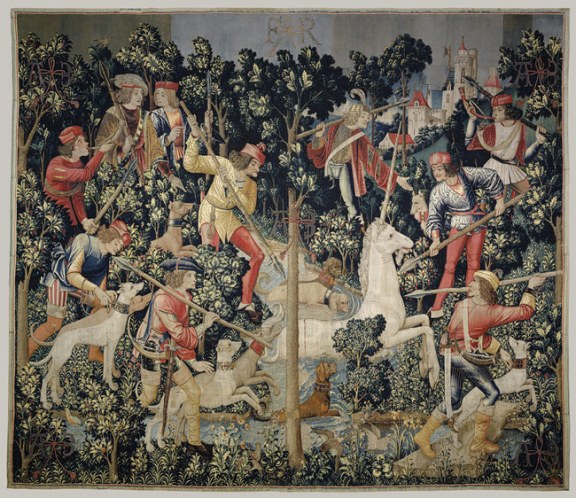 Six tapestries copied from the originals are now in place in the Renaissance palace, the seventh and last will be joining the Stirling castle collection in autumn 2014. The Stirling castle project was launched in 2001 by Historic Scotland, in partnership with the Historic Scotland Foundation and the Quinque Foundation, to bring back Renaissance splendor to the palace of king James V. Prior to this redecoration, the 16th century built palace had been an empty space, and no historical furniture had survived. The tapestries help imagining how the rooms of the royal palace might have looked like when James V and his queen Mary of Guise were present between 1538 and 1542, and later on the little Mary, Queen of Scots.