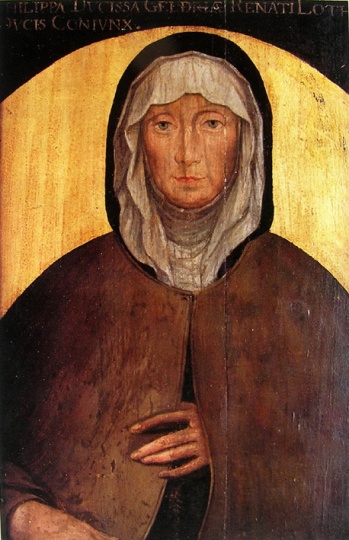 Much like her granddaughter Marie of Lorraine-Guise, Philippa of Guelders did not receive much attention from French historians. Only the final part of her life, spent in a convent at Pont-à-Mousson in the Lorraine region, inspired some rare biographers. The first was Hilarion de Coste (1595-1661), member of the Order of the Minimes de Saint François de Paule, who dedicated his work to the religious education of women. His descriptions of the lives of worthy and highborn women were first published in 1630, and in an enlarged version in 1647. His biography of Philippa of Guelders can be found on the website of SIEFAR’s Dictionary of Women in Medieval, Early Modern and Modern France. In 2005, Marie-Louise Jacotey published Philippe de Gueldre: Princesse à la cour, souveraine, épouse et mère puis religieuse 1464-1547, a small book that insists on Philippa’s importance as a model for catholic women. In 2007, Jacqueline Carolus-Curien wrote a chapter on the duchess Philippa in her book Pauvres duchesses. L’envers du décor à la cour de Lorraine. The first French historian to work on Philippa de Gueldres is Ghislain Tranié, who completed his PhD Philippe de Gueldre (1465-1547), « royne de Sicile » et « povre ver de terre » in October 2012.

Who was Philippa of Guelders? The name Guelders derives from the city and later duchy of Gheldres that was claimed by emperor Charles V in 1530 and finally became part of the Holy Roman Empire in 1543. In 1814-1815, the former duchy was integrated into the newly founded Kingdom of the Netherlands, but the town of Geldern that gave the duchy its name, is today in Germany.

Philippa’s father was Adolf, duke of Egmont and Guelders, and her mother Catherine of Bourbon, a descendant of Saint Louis (King Louis IX of France). Philippa was born in 1465 and had a younger brother, Charles, born in 1467. The children lost their mother two years later and Philippa was placed with her aunt Catherine, her fathers’ younger sister. In 1473, Charles the Bold duke of Burgundy conquered the duchy of Guelders. After the death of their father, the two orphan children were sent to the city of Ghent. Philippa was placed at the court of princess Margaret of Austria who was destined to marry the French dauphin. In 1484, Margaret of Austria and her ladies left for France.

Philippa then entered the court of her aunt Anne, the regent of France for her son the dauphin Charles. In September 1485, at about nineteen, Philippa became the second wife of René II (1451-1508), count of Guise and duke of Lorraine and Bar. However, René was then still married to Jeanne of Harcourt, accused of infertility, and of whom he requested a divorce. It was granted only two years later by the pope. When Jeanne died in 1488, the wedding between the duke and his new wife was officially celebrated in Nancy. Philippa of Gueldres became duchess of Lorraine and Bar, and queen of Sicily and Jerusalem.

Philippa mothered twelve children: seven died in childhood or very young like her daughter Isabelle (1494-1508), but five sons reached adulthood. Antoine, born in June 1489, became duke of Lorraine and Bar in 1508, Claude, born 1496, left for France and became the first duke of Guise. Jean and Louis of Lorraine became bishops. The youngest son, François, was killed at the battle of Pavia in 1525.

Philippa’s overpowering image as a saintly Catholic woman has long overshadowed the more complex character of a headstrong noblewoman. Her personal motto shows thistle and chestnut leaves and the French words Ne mi toqués, il point (« Do not strike me, it will sting »). The Belgian University of Liège owns a surprising artwork dating from the beginning of the 16th century, which echoes the duchess’s motto in a satirical way. 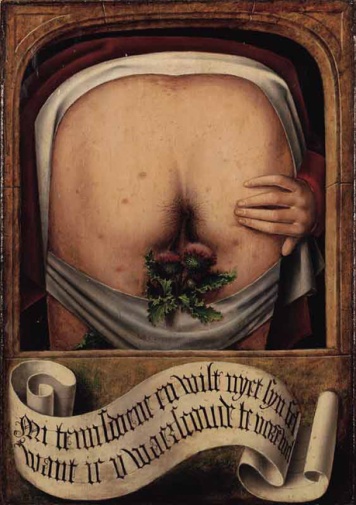 Almost nothing is known about this diptych. Some information can be found on the Wittert Gallery’s website in French and translated here in English. The author of the French description, France Capon, uses very cautious words. The depicted subject is indeed very rare; parallels might be found in the work of Hieronymus Bosch or Quentin Metsys. However, the Liège painting has an undeniably stylistic closeness to these Flemish artists. Capon describes the purpose of the diptych as « moralising » and points out the significance of the thistle as a symbol of defence, of austerity and even misanthropy. All these words describe quite well the character of duchess Philippa. Is it possible that this painting, by its artistic quality as well as its potential humoristic intention that might appear rude and not fitting for a noblewoman today, was intended for a highborn personality such as Philippa?

Philippa of Guelders went through difficult times in her early life. Before she became the duchess of Lorraine, then later the stern Poor Claire of the convent of Pont-à-Mousson, she might have needed to ‘sting’ to protect herself. It is interesting to see that the thistle also crossed the path of her granddaughter Marie of Lorraine-Guise. Marie had spent her early childhood in Philippa’s company. She might have remembered the prickly queen of Sicily when she married the king of thistles James V Stewart and became herself queen of thistles – queen of Scots.