When nobility and royalty were travelling from palace to palace, tapestries, carpets and wooden furniture were taken along to furnish the various rooms. But how were these interiors made comfortable, and how their inhabitants were sheltered from the summer heat or winter cold ? Tapestries have been used not only as decoration and signs of power and wealth, but also as wall coverings to keep off the cold. But what about the floors ? Were silk carpets any good to keep off the damp ? And do these tapestries protect from the summer heat ?

Renaissance interiors also had to have a pleasant and agreeable smell ; important sums of money were spent to perfume them. But what if there had been a much cheaper and simpler solution to create comfort, a nice smell, colourfull wall and floor coverings and protection from extreme temperatures ? This phantastic solution existed : matting from freshwater rush. The harvesting – cutting the rush stems from the river beds – was done during the summer months. In Renaissance France, matting was used to put on floors, but also on walls. A beautiful exemple is this detail from the François Clouet painting, « A lady in her bath » : 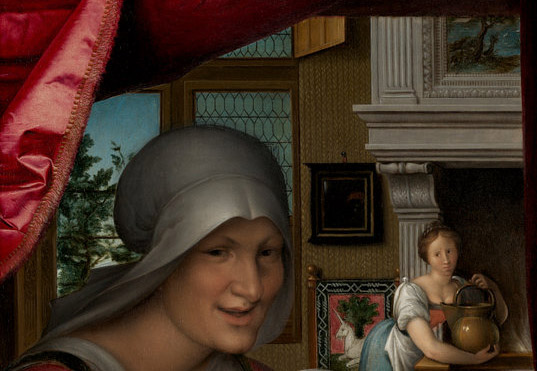 The wall next to the chimney and around the open window is seen covered with plaited rush. This ancient tradition has recently been re-employed by the french Centre des Monuments nationaux. One of the historic rooms in the Renaissance chateau of Azay-le-Rideau in the Loire region of center France has been refurbished in the manner shown on the above Clouet painting. The walls of this room have been entirely covered with freshwater bulrush, plaited by hand and sewn together with jute twine. The rush has been harvested and made by Rush matters, a company from Bedfordshire working in an entirely traditional way. The colour and structure of the rush wall matting is beautiful to look at ; the matting keeps a nice temperature in the room and also spreads a sweet smell.

This chamber of french lady Philippe Lesbahy, wife of the owner of Azay-le-Rideau in the 16th century, Gilles Berthelot, also received 16th century furniture and paintings. The neo-Renaissance bed was restored and decorations remade, all of them inspired by Renaissance paintings. A video (with French and English voices) of the chambre de Philippe Lesbahy shows the recreation of the bed hangings, cushions, colourful decorations and the posing of the rush matter on the walls.

Rush matter was a noble material it seems – noble enough to be laid out for Henry prince of Wales’ official portrait :