1683 : Rediscovery of the tombs of James V Stuart and his two sons by Mary of Guise 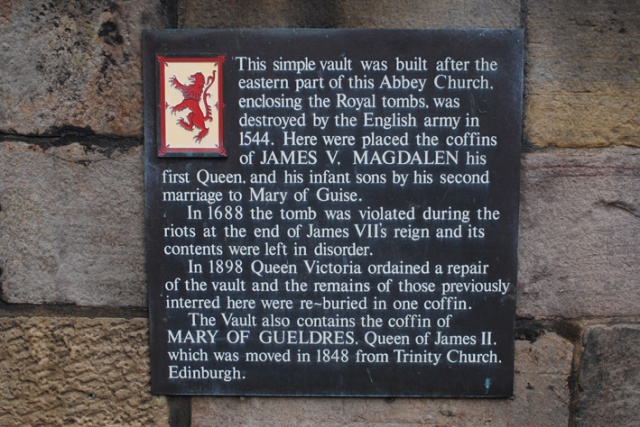 When I was visiting the ruins of Holyrood Abbey some years ago, in search of Renaissance tombstones or effigies (one can always dream), I stumbled upon this simple plaque. This was it then, the end of all my marble hopes. The tombs of king James V Stuart, of little James and Robert, his two sons by Queen Mary of Guise, had been violated in 1688, and nothing was left of their former appearance (if there ever had been any). My next hope was that someone had visited the tombs in the Abbey before these and the church itself, were destroyed. There was a good chance: roughly 140 years lie between James’ death in 1542 and 1688, even if one considers the destructions of Holyrood Abbey by the English army in may 1544. I even started imagining the odd visitor doing a sketch or drawing of the tombs. Alas, and until this day, I never found any – but I found my visitor. It was John Lauder (1646-1722), Lord Fountainhall, a Scottish advocate who saw and wrote of the tombs in 1683. Better still, his manuscript had been published in 1840 by some well-inspired history lovers – the famous Edinburgh Bannatyne Club. I learned from this brilliant man’s visit from the blog by Mark Jardine. Here is the full passage of John Lauder’s visit, plus his very Baroque reflections on life and death and vanity –  SIC TRANSIT GLORIA MUNDI.

» In this moneth of Januar 1683, was discovered accidentally, by the removing some seats in the Church of Halirudhouse [cf. Holyrood Abbey near Edinburgh] , the vault on the south east end of the Church, wheir the body of King James the 5th lyes buried. Skeen [cf. John Skeen ?, 1585-?] and others, in ther Chronologies of the Scots Kings, tell us, he was buried at Halirudhouse, but the lenth of tyme and negligence had worne the particular place out of the memory of men. It was knowen to be him by the inscription on his leaden coffin. I had the curiositie to goe and view the relicts of that gallant Prince. In the pend or cell ther are six lead coffins. The first is King James the 5th who dyed in the year 1542 ; but Drummond of Hawthorndene [cf. Scottish writer and poet William Drummond, 1585-1649], in the very end of his life, tells us, this is not the place wher he was first interred, but that King Henry the 8th of England’s army having defaced his tomb and monument, he was transported into this vault by King James the 6th and reimbalmed ; which appears by the freschnesse of his body and the liquor about him. The second is his first Quean, Magdalen, daughter to Francis the 1st King of France, who dyed in 1537. The third is Henry, Lord Darnely, father to King James the 6th and Quean Marie’s husband, who was strangled in 1567: by his body he appears to have been a very tall proper man ; others call this bodie Seigneur David Rizio’s, the Italian Musitian’s. The 4th is Ladie Jean Stewart, bastard daughter to King James the 5th and Countesse of Argile, who dyed in 1587. The other 2 are some of their children.

This was a humbling mortifieng sight, and a great instance and document of mortality, and vanity of the world ; all the glory of that sprightly Prince being crouded into this lowly cell, Mors sceptra ligonibus aequat [cf. 13th century abbot Saint Theobald of Marly]: Mors aequo pulsat pede pauperum tabernas Regumque turres [cf. Roman poet Horace]: Et hic transit gloria mundi. Many ordinary persons have better buriall places now, then what this magnanimous restles Prince hes got. If our thoughts deschended ofter unto the charnel house and sepulchres of our ancestors, their dust (the greatest their not being distinguishable from the meanest, as Lucian [cf. Greek satirist Lucian of Samosata] in Dialogues [cf. Dialogues of the Gods, of the Sea Gods, and of the Dead] wittilie represents) would serve to lay the peacok feathers of our vain proud aspiring projects, which we lay in such a train as if we ware immortall. (See this prosecute alibi.) And it might have the same effect on us, which Virgil, (libro 4 Georgic.,) tells us, the sprinkling a little dust on bees hes, Hi motus animorum atque haec certamina tanta, Pulveris exigui jactu compressa quiescent. All the inhabitants of that dark walley have lean and pale cheeks, hollow eyes, fallen noses, and none of them wear the jewells and other deckings, with which they glistred when they ware on life : but notwithstanding of this dissolution, we most all rise again at the great day of accounts. Our Kings of old ly but very meanly intombed. Buchanan [cf. Scottish humanist George Buchanan, 1506-1582] names some of them buried in Icolmkill [cf. island of Iona, Inner Hebrides], wher are also lying some of the Kings of Ireland and Norroway. I saw the tombs of King Malcolme and others in Dumfermeling [cf. Dunfermline abbey] church yeard. The English have the most part of ther Kings inshrined at Westminster, wher I have seen ther monuments. »

Sir John Lauder of Fountainhall, Historical Observes of Memorable Occurrents in Church and State, from October 1680 to April 1686, Edinburgh 1840, p. 89-90.