In the first half of the XVIth century, France and Scotland were not only bound by the Auld Alliance, a treaty of mutual military assistance between the two kingdoms dating from the end of the XIIIth century. Many Scots were also permanently living on the Continent: Scottish merchants living in the cities of Rouen and Dieppe, Scottish soldiers serving in the French king’s armies, and Scottish scholars and students teaching and studying at French universities. In times of conflict between the two British kingdoms, France occasionally sent soldiers to Scotland to defend the realm against England, but their most prestigious ambassadors were French princesses.

However, the first of Scotland’s XVIth century queens was an English princess, Margaret Tudor, the wife of king James IV who died at Flodden in 1513. In 1528, James V seized power for himself and decided to choose his wife on the Continent, hesitating between a princess from the German Empire, the kingdom of Denmark and the kingdom of France. His choice fell on Madeleine or Magdalena of Valois (1520-1537), eldest daughter of the powerful king Francis I of France and his then deceased first queen Claude. Madeleine was the first French queen of XVIth century Scotland, followed in 1538 by Marie of Lorraine or Mary of Guise, dowager duchess of Longueville, and in 1561 by her half French, half Scottish daughter Mary Stewart the Queen of Scots. 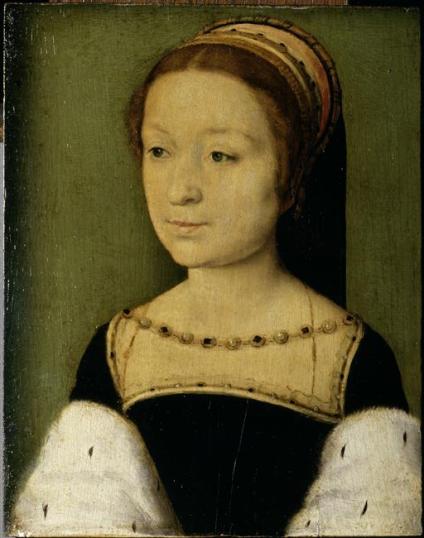 Queen Madeleine’s short life was readily made into a love story between a fragile French princess and a dashing young king of Scotland. Starting with Scottish poet Sir David Lindsay‘s Deploratioun of the Death of Quene Magdalene (1537), the sixteen-year old French princess travelling in a chariot, her failing health preventing her from riding on horseback, embodied a sweet lily of France sacrificing her life to her one and only love, the glamorous king James in his shiny armour. The story strongly appealed to the romantic XIXth century. Scottish author Robert Chambers (1802-1871), in his Book of Days published 1869 in Edinburgh, still referred to David Lindsay’s words, that Magdalene loved her king « so weel, that she weld have no man alive to her husband, but he allenarly »:

The death of the French princess, Magdalen, consort of James V of Scotland, is a very affecting incident. The young Scottish monarch had voyaged to France in the summer of 1536, to see the daughter of the Duc de Vendome, with a view to marriage; but, not affecting her on intimate acquaintance, he turned his thoughts to the royal family as likely to furnish him a better bride. The king, Francis I, received him with great kindness at a place to the south of Lyon, and thence conducted him to a castle where his family was residing. He found the Princess Magdalen unable to ride on horseback, as her mother and other ladies did, but obliged by weakness of health to be carried in a chariot. ‘Yet, notwithstanding her sickness’ —so the contemporary Scottish historian Lindsay informs us—’fra the time she saw the king of Scotland, and spak with him, she became so enamoured of him, and loved him so weel, that she weld have no man alive to her husband, but he allenarly [only].’

It is remarkable that such a young and fragile princess, having fallen in love with a king of a foreign country regarded by most French as cold and savage, succeeded in having it her way. Becoming queen and putting a crown on one’s head seem to be two rather literary or even fictional motives, but the fact that love is always mentioned when Madeleine’s story is told, for example by French poet and writer Brantôme, shows that it might contain some historical truth. Nevertheless, Madeleine’s father king Francis I did what it took to make his beloved daughter’s wedding a most lavish and most spectacular one:

Sage counsellors of both countries discommended the union; but the young princess easily induced her father to consent, and the consent of the king of Scotland followed. On the 1st of January, the pair were united in the church of Notre Dame, in the presence of seven cardinals and a great assemblage of the French nobility, amidst circumstances of great pomp and popular joy. ‘Through all France that day, there was jousting and running of horse proclaimed, with all other manly exercise; as also skirmishing of ships through all the coasts; so that in towns, lands, seas, firths, castles, and towers, there was no man that might have heard for the raird [uproar] and noise of cannons, nor scarcely have seen for the vapours thereof. There was also within the town of Paris, cunning carvers and profound necromancers, who by their art caused things appear whilk wes not, as follows: fowls flying in the air spouting fire on others, rivers of water running through the town and ships fechtand therupon.’ (www.thebookofdays.com)

The love story between the young Stewart king and the beautiful Valois princess continues in France throughout the spring of 1537, and up to her farewell to France in the ensuing summer. But then, things went from bad to worse. When the young couple arrived at the harbour of Leith near Edinburgh, Madeleine was already sick from the travel by sea. She managed to disembark and reach the royal palace of Holyroodhouse, but there she died several weeks later on 7 July, 1537. Through her early death, she united Scotland in its first general mourning:

With his young bride, and a hundred thousand crowns by way of dowry, gifted moreover with twenty war-horses, as many suits of elegant mail, two great warships, and a vast quantity of jewels and other minor articles, the young Scottish monarch set sail for his own country. Landing at Leith on Whit Sunday, the young queen, full of love for her husband and his country, knelt on the shore, took up a handful of sand, and kissed it, invoking God’s blessing upon Scotland. She was received in Edinburgh with triumphs and shows of unexampled grandeur, with, what was far better, the affectionate reverence of the entire people. But the doom had already been passed upon her. She withered like an uprooted flower, and only forty days from her arrival, lay a corpse in her husband’s palace. The death of this beautiful young creature in such interesting circumstances, made a deep impression on the national heart, and it is understood to have been the first occasion of a general mourning being assumed in Scotland. (www.thebookofdays.com)

Queen Madeleine never got what she had dreamed of: wearing the Scottish crown on her head. It seems that her husband mourned her, but finally, James V did not die of a broken heart. After he had put his first queen in a tomb in Holyrood abbey, he started looking for a replacement. After all, the first job of a queen is to make children – better still, to make little princes -, that Madeleine didn’t have the time to do.

There is no romantic love story attached to James V’s second marriage – at least, none that we know of. The king of Scot’s new wife was Marie of Lorraine, eldest daughter of the duke of Guise and dowager duchess of Longueville, a mother of twenty-two who had already lost a husband and a son. Marie of Lorraine was crowned on 22th February 1540 at Holyrood abbey, thus becoming the first XVIth century French Queen of Scots.